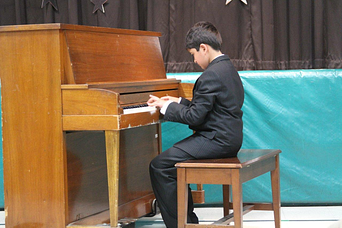 invitation to perform at Carnegie Hall represents one of the highest achievements in a life of a classical musician, one that only a select few ever manage to reach. Arguably the world's most famous concert hall, it is the Mount Everest of the music world. Only those with the most talent, passion and perseverance ever get there. You also have to be a grown-up to perform there, or do you?

Zach Bacino and Shival Panchal (in photos) are two young and ambitious pianists who live in New Jersey's Hunterdon County. Zach is 11 and Shival is 9. They have both been taking piano lessons at Hunterdon Academy of the Arts since 2010, and guess what? They WILL perform at Carnegie Hall on February 9, 2013--THE Carnegie Hall! "How is that possible?" you may wonder.

Don't get me wrong, folks.  That piano bench of yours will have to get a lot of wear and tear

before you can make it to Carnegie Hall, as Zach and Shival did.  But there is a new program that makes it possible for hard-working young musicians to get a taste of what it's like to perform at such a famous venue.  It is called The Carnegie Hall Royal Conservatory Achievement Program (TAP).  Jointly launched in March 2011 by New York’s Carnegie Hall and Canada’s Royal Conservatory, The Achievement Program establishes a new national standard for musical achievement for people of all ages studying music in the US, and offers a sequential course of study from beginner through advanced levels.  Hunterdon Academy of the Arts adopted The Achievement Program as its official lesson curriculum in 2011, and has since been named a Founding School of the Program.  Hunterdon Academy of the Arts also serves as an NJ Assessment Center for music lesson students interested in undergoing periodic TAP evaluations of their musical skills.

Shival and Zach are among the top 20% of piano students in New Jersey who have taken the TAP exams this year. They were invited to perform at the Tri-State Certificate of Excellence Recital at Carnegie Hall on February 9, 2013, 2 PM. Kudos to both of them, as well as their teachers--Richard Woo and Stefanie Watson!

Purchase tickets for the Tri-State Certificate of Excellence Recital here!

Hunterdon Academy of the Arts