As an early childhood music teacher, I am often asked to recommend the most

suitable music class for 3 and 4-year-olds. Answering that question doesn't take me very long at all: the most enojyable and educationally sound class for this particular age group is Musikgarten's The Cycle of Seasons. The following paragraphs, adapted from Musikgarten's official publications, describe in some detail the contents and purposes of this wonderful curriculum.

At first glance, The Cycle of Seasons looks a lot like music classes for toddlers. There are parents and children sitting around in a circle singing a hello song, doing a finger play, or perhaps echoing patterns.  But in just a few minutes, both the look and feel of the class begins to change, and the resemblance to earlier classes is much less apparent.  Depending on the personality of the class, your child may leave you and move closer to me to hear the story, for the listening lesson, or the movement activities.  S/he may engage in all of these actions on his/her own, or s/he may pull you in for one or more of them.  We encourage you to let your child set the parameters regarding your participation at this point; come willingly if s/he invites you, and bask in her/his independence if s/he does it on her/his own.  And don’t be surprised or resistant if s/he changes her/his mind mid-way through the activity!

The Cycle of Seasons is designed to accommodate the “emerging independence of the three-year-old child”, and while you may not be familiar with this term, we’re

sure you are familiar with this sometimes delightful and other times maddening trait you’ve probably noticed in your child.  This is the characteristic that throws your formerly docile child into a tantrum when you try to help him/her zip up his/her jacket as you are rushing out the door to a doctor’s appointment.  This is what is at work as your child persists in dressing him/herself, right down to putting the shoes on the wrong feet, the whole time insisting that everything is perfect.  This is also the governing force when your child wants to be picked up and carried through the final circle dance in class!  Your child is caught in a struggle between wanting to be independent and wanting to experience the warmth and security of your love and nurturing that was so much a part of “toddler-hood”.  The “I want to do it myself” mantra that is so often frustrating to adults, is a driving force that compels children to gain necessary skills, but your child will only be comfortable progressing to the new stage of development if s/he is reassured that this progression does not mean losing everything about his/her former familiar life.

So go ahead and let your child set the agenda (within reason!) for the role you play in this class.  If you are watching your child participate without you, you can take credit for raising a self-assured three-year-old.  And when s/he returns to you, welcome her/him with open arms and enjoy the moment!  If, on the other hand, your child constantly wants you as a partner, relish the time together; before you know it, you will hear the familiar cry of the three year old: “I want to do it myself”!

Ann Engberg, Musikgarten Teacher at Hunterdon Academy of the Arts

In March, five-year-old William Manno, violin and piano student at Hunterdon Academy of the Arts, entered the 2010 VOICES Music Composition Contest for Children, at the recommendation of his violin teacher, Dr. Russell Hoffman.
The annual VOICES Competition, which is intended for children ages 5 to 12, requires participants to submit an original composition of music with a vocal component.  The song may be written in traditional or child-invented notation.  Contestants are asked to mail in their song along with a cassette or CD recording of it.
William had observed his father compose music since birth and actually co-wrote a piece with him entitled "Body Song" to teach little children about the organs of the human body. For the VOICES Competition, William decided to work on his own song about a topic he loves: the planets.  He asked his dad how he should start, and dad recommended he write some rhyming sentences stating facts about the planets.  Knowing quite a bit about the planets and wanting to be thorough, William came up with 3 pages of facts, which he and dad edited down to a page.
William then sat at the piano and plunked out notes to go along with his words, writing the note names, in letter form, above each text syllable.  Taa-daa! William said when his Planet Song was complete, and sang it for his mom and dad. His parents were thrilled and dad helped William write down his work in traditional music notation.
At the VOICES Competition, the judges selected William's Planet Song as an outstanding piece.  It was performed at the organization's recital in early April, where William and other honored students received awards for their efforts.
Sign up for our Blog to receive the latest news at Hunterdon Academy of the Arts!
piano lessons music lessons for children music classes for children violin lessons music competitions composition

When browsing the social media world, one notices that the word "Orff" is used playfully in many different constellations, some funny (as in, "I'm orff to bed"), others apparently meant to be offensive (as in, "Orff You!"). Though the word "Orff" may have a strange, even ominous ring to it, conjuring up images of giant creatures in the woods or on the bottom of the sea, it actually is closely associated with one of the most wonderful methods of teaching music to children.

Carl Orff (1895-1982) was a visionary German artist and pedagogue whose work has enjoyed a lasting presence on the concert stage as well as in the music classroom.  Though a prolific composer, Orff is now celebrated primarily for his large-scale 1932 oratorio Carmina burana.  By contrast, his pioneering pedagogical research seems generally far less known, though it is very much alive and thriving in school systems around the globe.

In 1924 Orff and Dorothee Günther co-founded the Günther-Schule in Munich--a new type of school that offered instruction in music, dance, and gymnastics.  As head of the music program of the Günther-Schule, Orff developed his educational philosophy that music should be learned in combination with movement, rhythm, dance, and speech.  Orff's ideas were highly controversial at the time, requiring music teachers to acquire special skills--knowledge of Orff's preferred instruments (recorders, glockenpiels, small metallophones, marimbas, drums, etc.) as well as the ability to improvise, i.e., to create music spontaneously.

Orff's music classroom functions as a "lab" where students explore sounds and develop their innate creativity in a relaxed and friendly group setting (Orff Ensemble).  With students singing and dancing to improvised rhythms, and communicating with each other in "call-and-response" situations, music study becomes an enjoyable, playful activity, and an experience involving multiple senses simultaneously.

From 1932 to 1935, Orff collaborated with Gunild Keetman and Hans Bergese in publishing his Orff-Schulwerk: Elementare Musikübung, which presented an introduction to group improvisation and techniques of playing various percussion instruments, as well as a few ensemble compositions.  Music teachers at the time were flabbergasted by the Orff-Schulwerk since it ran counter to established concepts in traditional music education.

It was not until 1950, when the Orff-Schulwerk was reintroduced with a second publication, Musik für Kinder (Music for Children).  This 5-volume work represents the basis of Orff instruction, providing teachers with a discussion of what is often called the "Orff Approach" or "Orff Method," and a number of ensemble compositions.  Due to its universal appeal, the "Orff Method" has since been adopted by music educators around the world.

For families in and around Flemington, NJ, Orff instruction is now available at our Hunterdon Academy of the Arts, starting in September 2010.  Enroll today since space is limited! Music Lessons and the Family Budget

Though rates for private music lessons may vary between instructors and music schools, they tend to be higher than tuition rates for group classes.  Why?

As with almost anything else, you get what you pay for!  In the case of private lessons, your tuition dollars provide you with the undivided attention of your teacher, who tailors style and content of his or her instruction to meet your individual needs.  For many students, the individual lesson format provides the ideal learning environment to make progress as quickly as possible.  In that sense, a 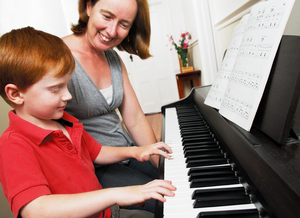 private lesson teacher is no different from your personal gym trainer, who makes sure that you do your exercises correctly for maximum benefit.

If we stick with the sports analogy for a moment, some of us are not particularly crazy about working one-on-one with a trainer, or working ourselves through all that exercise equipment at the gym, one machine at a time.  That can be tedious and a bit solitary at times.  By contrast, joining an aerobics class or a sports team to play soccer, football, basket ball, and what not, is an entirely different experience.  Although as members of a team, we may not be getting all that individualized attention, we're having fun, working collaboratively, laughing, and sharing victories and losses.  And on top of it, we're still toning those muscles and losing a few pounds!  Not bad at all.

When it comes to music education, it is similarly possible, and enjoyable, to learn within the socially interactive context of group classes.  Young beginners often express a strong preference for music classes not only because of the social interaction involved but because the group format offers them the most developmentally appropriate venue for absorbing information.  Young children may learn as much from observing each other as they learn from their designated teachers.  To be sure, for some kids, the group class format may be too stimulating and distracting.  Kids falling into this category will do better in music lessons under the guidance of an instructor, who focuses their attention and provides a firm structure for the learning process.  Parents should consult with their music teacher in choosing the option most suitable for the learning disposition of their child.

If after careful consideration you have reason to believe that your child may progress more easily through group instruction, why would you sign her up for private lessons?  And why, looking at your bottom line, would you invest the extra dollars on individual instruction before your child is actually ready to enjoy its full range of benefits?  Start young beginners age 4 through 8 in group classes as a high-quality, low-cost alternative to music lessons!  When given sufficient time to mature and learn, children are more likely to develop a life-long appreciation for music.  Isn't that what it's all about?

Hunterdon Academy of the Arts, Flemington