Singing, Opera, and the Exorcist Cat (By Phyllis Schmidt)

I grew up on a small family farm.  We raised Holstein cows (for milking), steers (for eating) pigs, chickens, and ducks.  We had lots of cats who were attracted to the milk, and our wonderful and very smart border-collie dog, "Whizzie", who was trained to bring the cattle into the barn.  We farmed the usual crops necessary to feed and house all the animals; corn, wheat, hay, straw, alfalfa.   My three brothers and I were born into a sports-minded family.   My father made his living as a farmer, but he really wanted to be 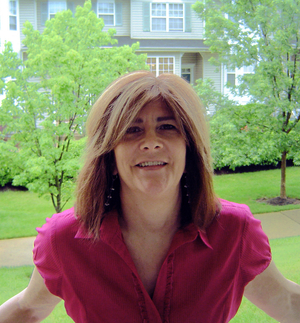 Meanwhile, among the animals, and the farming, and the sports, there was singing.  I constantly sang, hummed, and whistled, much to the dismay of my brothers, especially my older brother who was very vexed and annoyed by my laryngeal displays.  I used to beg to mow the lawn (the gas-powered lawn mower was very loud at that time – there was no thought of noise pollution) so that I could sing at the top of my lungs and not get myself into trouble.  Then there were those times that I did get myself into trouble – I was quite the tease and would harass my brother by singing or humming or whistling around him.  He was never impressed by this.   However, my mother was impressed.  She noticed my constant singing, humming, whistling, and she signed me up for the waiting list for the best piano teacher in town.

Luckily, I lived about 5 miles from Penn State University which had a vibrant arts community.  My single aunt took me to many wonderful musical and theatrical events there.  I had a single Uncle who lived in Queens, NY.  He worked as a steel salesman; his office was in the Chrysler building in Manhattan.  One year, my aunt took my brother and me to visit him.  It was the first time we had ever seen an elevator or an escalator.  My brother and I rode up and down on my Uncle's apartment elevator and got out on the roof – this was for hours.  We were mesmerized by all things "city".  Later when I was in college, my aunt and I went back to NY and went to the opera.  By this time, I had studied opera in college - both singing, and in music history class - but I had never been to an opera.  Seeing Grace Bumbry (Delilah) lying on top of the tenor on a bed singing in Saint-Saens "Samson and Delilah" was heavenly.  Well, it wasn't so heavenly for Samson since he died at the end, but it was for me.   I really did not think anyone could sing so well lying down and - without a microphone.  It was in French, and there were no LED English translations in front of you at the time, so I could not understand a word.  But, it did not matter.  It was still delicious.  On my return to college, I got the part of Letitia in Menotti's "The Old Maid and the Thief" and had my own opera experience.

And now – the exorcist cat.  Several years later…a few years later…many years later…quite a few years later!...my younger daughter (25) moved home and brought her cat with her.  His name:  "Peapod"    Why Peapod?  Because they were 2 peas in a pod.   Dear Lord.  Peapod had competition right from the start because my daughter's old cat, Velvet, still lived with me.  Peapod and Velvet definitely did not become BFFs, in fact, we had to move Velvet to the basement, and keep Peapod on the first floor.  This was after we tried to keep Peapod in the bedroom during the day and on the first floor during the night, while Velvet was on the first floor during the day, and in the basement at night.  You can imagine that this did not work.  Peapod dug up and destroyed the carpet near the bedroom door.  Eventually, he learned how to jump up on the dresser, then jump down – with just enough velocity – to turn the doorknob and open the door.  The worst part was that Peapod would bite everything and everyone who came in contact with him.  Petting him for less than 5 seconds resulted in a bite. Not petting him for less than 5 seconds resulted in a bite.  Moving bare legs resulted in a bite.  Moving covered legs resulted in a bite.  Toes moving under a blanket resulted in a bite.  Knees moving on a chair under the kitchen tablecloth resulted in a bite.  You get the idea.  After a thwarted bite effort – and this is the exorcist part –  he would hiss his exorcist hiss and scrunch up his nose, draw back, widen his beady eyes even more than usual, and attack.  We installed a squirt bottle filled with water between the kitchen and the living room.  This way we could squirt him during bite season (that is, every day), we could squirt him when he tried to run down to the basement (that is, every day) to terrorize Velvet, or simply hide under the car.

Finally – and this is the opera part – I found my secret weapon.  One day I came home in a particularly jovial mood and started singing about everything and everyone.  I was even singing to Peapod about Peapod.   I was singing the conversation, (recitative) in my opera voice.  I was making up the conversation as I went along. Something like, "Oh, my dear Peapod, Why do you bite me?  Why do you hiss your exorcist hiss?  What have I done to you to deserve thi-i-i-i-i-i-i-i-is?" (the usual opera high drama) On especially important Peapod words (like this) I would hold the note and sing as high as I could in my coloratura range and trill. Peapod did not like it one bit.  He put his back up and immediately jumped off the chair, ran under the kitchen table, and flattened himself like a pancake under the tablecloth.  Now I use the secret weapon whenever I need to.  I sing, hum, whistle, trill, and do so as loudly as possible, in my best fortissimo way.  You know what they say, "it's never over 'till the fat lady sings".  And, I intend to keep on singing for a long, long time.