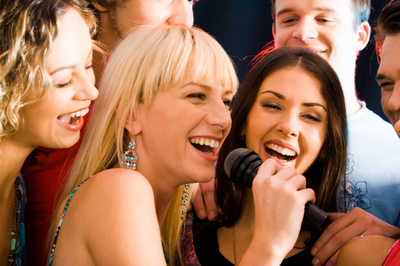 by Stephen Sondheim). And if you’re wondering how someone learns to do that, I wish I could tell you that there is a gradual process with some essence of a learning curve. The fact of the matter is--you’re thrown into it with the expectation that you’ve been doing it all your life and someone trusts you, somehow, to not make the production a complete disaster. The number of responsibilities between the actors/singers, stage blocking, musical score, and orchestra is certainly overwhelming and definitely cannot be constantly controlled or even monitored by just one person. I imagine the more and more you do it, the more you learn to focus on what is crucial in a given moment, but that is not to say that other elements are not being overlooked. The wonderful thing about this form of art is that no one person holds everything together. It is truly a collaborative art and one that requires trust between all members of the production. Everyone is relying on each other, including themselves, to give a certain cue so the next cue can be cued. Really, the whole show seems like a masterfully ordered sequence of properly timed cues. What I came to realize after last night’s rehearsal, was how little time there was thinking of and shaping the music. This is not to say that the orchestra was not playing the whole time, because they certainly were. What I am referring to is actually playing the score musically and not just playing the notes on the page. I observed a performance of The Lion King from the pit in Philadelphia not too long ago and I won’t forget what the conductor told me and it was this: “Conducting musicals [at least for him] is not so much making beautiful music as it is directing traffic.” Between watching for visual or audio cues on stage, and cueing members of the orchestra from a condensed score, so much of my job is simply making sure people are making entrances at the right place and right time. Is there something lost about the art knowing that? Perhaps. But the outcome is truly astonishing and spectacularly entertaining…and it’s unbelievably fun to do. I will be conducting the October 22nd performance at The College of New Jersey.