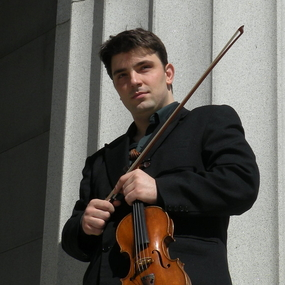 Hailed by The Hartford Courant for his “expressive and warm sound and faultless intonation,” Albanian-born
Mialtin Z. is an accomplished violinist and violist. He has performed across the United States in venues such as in Carnegie Hall, Merkin Hall, Miller Auditorium, and overseas in Piccini Hall in Italy, Red Hall in Kosovo, Great Britain, National Theatre and the Arts Academy Hall in Albania, Macedonia, and Greece. Mialtin is an avid chamber musician. He was invited by The Fontana Chamber Arts Society to premiere several works by Curtis Curtis-Smith and Carter Pane. He has also worked closely with musicians such as Pinchas Zukerman, Lawrence Dutton, Michael Tree, Robert Mann, and the Emerson and Tokyo Quartets. In 2010, he joined the Lorelei Piano Trio.

Mialtin has been broadcast live on the National TV Station and Radio in Albania and on BBC Radio in England and has been featured in numerous articles by well-known newspapers in Albania and in the US. He can be heard on the Brown & Brown Label.

Bilingual: Mialtin is fluent in English and Albanian.