My Musical Journey on the Guitar (By Robin Stone) 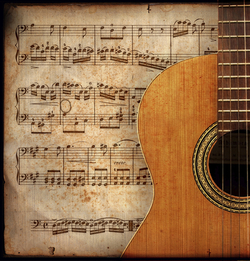 The person who inspired me to start playing music was my Father. My earliest childhood memories include music in my home. My father was a guitarist and singer in a country band and there were always musicians stopping by to rehearse or just play. Music to me was a social activity. Everyone would participate in some way. The first instrument I played was a drum but I soon moved on to the guitar. My father taught me a few chords on an acoustic guitar but I wanted to rock. He bought me my first electric guitar and amplifier (I still have the amp.) when I was twelve years old. I remember learning Eric Clapton songs and playing in a garage band in those early years, but mostly I would play along with Kiss and Led Zeppelin records and pretend I was a rock star.

In Fifth Grade my family moved to Mountain Lake New Jersey. That is where I met Dave Read. I had no idea that we would become lifelong friends. We still play in a band together to this day. Dave was taking lessons with a great guitarist named Bob Pomicter in Hackettstown New Jersey and he saw getting pretty good. When we would get together and jam Dave would play the most amazing solos. I asked how I could do that and he would simply reply practice your scales. All I knew back then was the pentatonic scale but I would practice every day. Dave was studying classical guitar and learning to read music so he learned more songs and understood things about music that I just couldn’t get. He eventually began to pass along the things he learned.

I remember the day Dave came to my house with a recording of Andres Segovia and made me listen to it. I was impressed and I told him, “These guys are pretty good.” Dave informed me that it was one man with an acoustic guitar! I was knocked out! I really wanted to learn to play like that but there was not much money in my home back then so I couldn’t take lessons. I found a book in a local music store. It was Mel Bay’s Classic Guitar Method Volume 1. It came with a cassette tape with recorded examples of all the exercises. That’s how I really learned to play. When Dave came over I would play for him and he would offer advice where appropriate. I guess you could say he was my first classical guitar teacher. It’s amazing, I am still learning from him today.

When I was eighteen I had some money in my pocket so I went to visit Bob Pomicter and my guitar journey continued. I learned a lot from Bob, especially about scales and improvising. Years later Bob helped my get through the audition at The College of New Jersey. That is where I met Dr. James Day and began to get serious about classic guitar. I also quit my factory job and became a guitar teacher full time. That was in January of 2000. I have been teaching ever since. It has been an amazing journey so far. These days I keep pretty busy teaching private guitar, general music, band, and chorus at a public school. I also play classic guitar at weddings, art galleries, and corporate functions. I play in an acoustic duo, a country band and of course the Dave Read Band. I have been blessed to be able to share my love of music with many people throughout the years and now I am sharing my rock band experiences with my students at HAA. Life is good today!

Schedule a Trial Guitar Lesson with Robin at no cost to you!