It's OK to Be Nervous: Tackling Music Performance Anxiety

I have been teaching the clarinet for over ten years. I have helped many students prepare for performances and auditions. As a performance or audition approaches, I'm often asked the inevitable question, "How do I keep from getting nervous?" It's a good question. Unfortunately, there is no perfect answer.

Firstly, I let my students know it's ok to feel nervous. It's nothing to be ashamed of. Sometimes when a student feels anxious in the few days leading up to a performance it can be a good sign. It shows the student really appreciates the hard work and preparation that has gone into his/her performance. Some of my students have said to me in the few days before a performance that they didn't feel ready. I have also felt this way about my own performance preparation on occasion. More often than not, a feeling of lack of preparation is just your mind being overly cautious. This stems from the fact that in 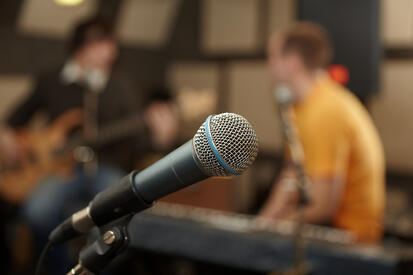 Thirdly, mistakes are not the end of the world. This is something I still have to constantly remind myself in my own performances. You'd be amazed how often no one notices a "mistake" other than you. I always tell my students not to let mistakes ruin their performance, since in all likelihood no one in the audience will have even noticed.

Lastly, preparation is key. As a soloist, I have only performed poorly in public one time. It occurred during the final year of my master's degree. I was going to perform a piece I had already played and essentially could play from memory. I figured I could wing it since I knew the piece so well, thus put in very little practice time. When the performance came I was very uneasy on stage and performed well below my personal standard. I learned my lesson and would never let it happen again. If it's a serious performance then it requires serious preparation. The best performances I have given were the performances for which I was most prepared. I felt relaxed on stage and ready to give the audience a good show. I usually remind my students on their last lesson before a performance or audition, if they have done their homework and put in the practice time, there is not a reason in the world for them not to play well. I really try to avoid saying, "don't be nervous" to my students. If I've done my job in helping them prepare, I shouldn't even have to say it.

My first clarinet teacher was a very old school kind of man. He was well into his 80's until he recently passed away. I once asked him what he did to keep from getting nervous on stage. He said he just tried to sit in his chair like a sack of potatoes. It was funny but good advice. Not only was he trying to tell me to keep my body relaxed and limit the tension in my arms and fingers but to also have a carefree attitude about performance. If fear of mistakes rather than giving a memorable performance was foremost on my mind, then I was doomed to play poorly.

Remember. there is no shame in feeling nervous. It happens to everyone, and as I stated earlier can even be a good thing. As athletic coaches often say, "play like you practice." Rather than worrying about what you can do on the day of an audition or performance to relax yourself, put that extra energy into your practice and preparation and it will lead to great performances.