We are excited to showcase Actress Kristen Blossom as our Faculty of the Month of June. Though this is only her second year at HAA, Kristen’s acting classes have become an important part of our program. In below interview, she shares her insightful thoughts on acting and teaching:

You are a well-rounded artist of many skills and talents (singing, acting, painting, photography). Where do 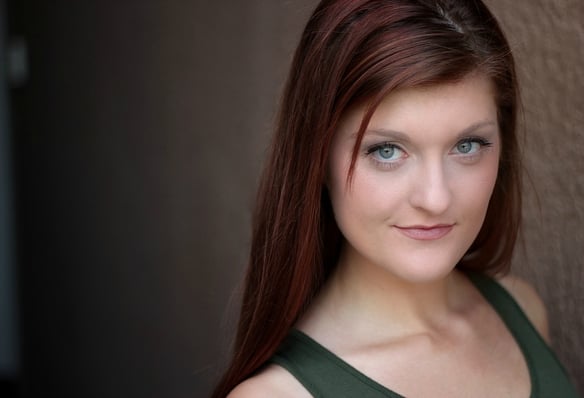 You have a lot of professional training (Master’s Degree in acting), but you once said that the best actors don’t act, they are just being themselves. Can you tell us more about that? So, why did I need 7 years of acting training to learn how to not act? Haha. Ok, so, get ready for a novel: Technically, it is acting, but my instructor (Andrei Malaev-Babel) used to say to me, “it’s you and not you” at the same time. When we get up on stage, or at any point when we feel as though people are watching us, we change. We’re different when we’re by ourselves in our room, then from when we’re around others. So, for instance, just now, I’m sitting at my computer typing and as soon as my sister and her boyfriend walked in the room, I sat up straighter, felt a little flustered like I needed to say something, and for some reason I make my eyes bigger whenever people are around, maybe to compensate for being sad or tired. These things I did were very subtle and subconscious, but they were slight changes that brought me farther away from the truth of what I was feeling in that moment. Imagine this on an ever huger scale, when I need to get up on stage in front of 3,000 strangers. What happens to you personally when you need to address a large group? I can guess a couple of things: Tense shoulders, locked jaw, locked knees, rigid stance, inability to breathe deeply, inability to use your full vocal power. So, if my job as an actor is to “live truthfully under imaginary circumstances” (Sanford Meisner), then I need to let all that tension go and experience something my instructor (Andrei Malaev-Babel) calls “public solitude,” which is when I am acting exactly as I would alone in my room, but in front of an audience. So, back to the whole not acting thing… If my character is angry, I’m not going to imitate anger, I’m not going to pretend to be angry, or fake anger, or make an angry face, or act like I’m angry… I’m going to be angry. I do this exercise with my older students: I say, “act like you’re cold” and then they shiver and rub their arms up and down with their hands and bounce around, and then I say, “ok, drop that, now just simply be cold.” And then suddenly there’s a temperature drop in the room, there’s a super subtle, truthful, honest look of cold I can see on their faces and any shiver that comes to them is real and natural. Does this make sense? I could go on for 56 more pages.

Tell us about your students. What do you enjoy most about working with young actors and singers? Working with kids is the best, because they haven’t yet started stifling their emotions, impulses and creative movement. They feel things sooo deeply and then they express those feelings by rolling around on the floor and doing crazy dances (which is truthful, honest behavior, exactly what an actor is called to do). Us adults, on the other hand, we censor ourselves, we say, “this feeling is inappropriate” then we swallow it, and it ends up manifesting in back pain (or neck, jaw, chest, throat, acid reflux, stomach knots etc..). The feeling doesn’t get released, it just reeks havoc on our physical body and we lose that impulsive freedom we once had to jump like a frog, yell full volume, do an evil laugh, make up a spontaneous song, make weird noises and randomly collapse onto the floor -- all the things kids do with absolute ease. Kids have not yet been domesticated; they’re not creatively-crippled by self-consciousness and fear. It takes years of training to bring adults back to that place of child-like wonder and instinct. As we get older, we hard core judge every teeny tiny move and sound we make. Children don’t have that inner bully, which says things like, “You look weird, don’t make that face. That sounded ugly. That was a stupid idea.” Unfortunately, this voice starts speaking up once my students hit Middle School and it’s my personal goal to SILENCE it.

What is your recipe for success as a teacher? Affirmation and asking questions that lead them to experience self-guided discoveries.

Movies or Theatre? What’s closer to your heart and why? Theatre, because I like exchanging energy and communing with the audience.

What do you enjoy about being part of the Hunterdon Academy of the Arts community? There are a lot of Harry Potter fans. Ha, but for real, the level of talent amongst the staff is extraordinary, but along with that, the way everyone is still very personable and silly, that’s why I like it here, because what’s the point of it all if you aren’t having fun?

What are your other interests and hobbies? Yoga and I don’t know what else, maybe I should get more hobbies.

If you could play a role in a famous movie, who would it be? Um.. Batman.

Over the past two years, we have been listening carefully to our students and prospective students.  Their input has been ...
Start Reading
Valentina Jotovic Apr 17, 2010 4 min read

Music Lessons and the Family Budget

Though rates for private music lessons may vary between instructors and music schools, they tend to be higher than tuition ...
Start Reading
Valentina Jotovic May 13, 2010 3 min read

We are delighted to welcome Jordan P. Smith, a distinguished young artist, to the
Start Reading