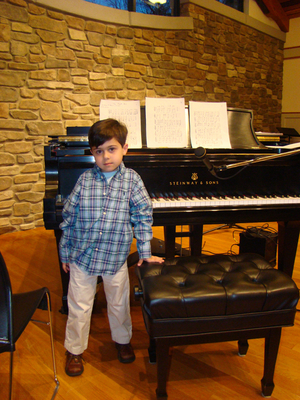 In March, five-year-old William Manno, violin and piano student at Hunterdon Academy of the Arts, entered the 2010 VOICES Music Composition Contest for Children, at the recommendation of his violin teacher, Dr. Russell Hoffman.
The annual VOICES Competition, which is intended for children ages 5 to 12, requires participants to submit an original composition of music with a vocal component.  The song may be written in traditional or child-invented notation.  Contestants are asked to mail in their song along with a cassette or CD recording of it.
William had observed his father compose music since birth and actually co-wrote a piece with him entitled "Body Song" to teach little children about the organs of the human body. For the VOICES Competition, William decided to work on his own song about a topic he loves: the planets.  He asked his dad how he should start, and dad recommended he write some rhyming sentences stating facts about the planets.  Knowing quite a bit about the planets and wanting to be thorough, William came up with 3 pages of facts, which he and dad edited down to a page.
William then sat at the piano and plunked out notes to go along with his words, writing the note names, in letter form, above each text syllable.  Taa-daa! William said when his Planet Song was complete, and sang it for his mom and dad. His parents were thrilled and dad helped William write down his work in traditional music notation.
At the VOICES Competition, the judges selected William's Planet Song as an outstanding piece.  It was performed at the organization's recital in early April, where William and other honored students received awards for their efforts.
Sign up for our Blog to receive the latest news at Hunterdon Academy of the Arts!