We're starting the 2016 Faculty Showcase series with Joseph Pinto, long-standing clarinet (and saxophone) instructor at Hunterdon Academy of the Arts. In the interview that follows, Joe provides some great insights into his teaching philosophy and methods, which have yielded some nice results over the years.

What do you teach at Hunterdon Academy of the Arts, and what is your educational philosophy? I’d say my educational philosophy is to try and get students to use common sense when learning their instrument and learning a piece a music. You could call it “common musical sense.” Students of all ages often look at their instrument as a foreign object and a piece of sheet music as a foreign language. I don’t blame them but I try and demystify things for them. I’ll often ask them a very straight forward question that has a simple answer. When they give me that simple answer and I say “you’re right”, they’re eyes often widen because they took a step closer to understanding music without having to read several chapters in a music textbook to understand it. An example is the concept of breathing. If they take a “bad” breath in the middle of a phrase, I’ll ask them “would you breathe in the middle of a sentence” (when I ask the question I’ll take an exaggerated breath in the middle my sentence). They often chuckle and then always say no. Then I ask them why would you breathe in the middle of a phrase which is in fact a musical sentence. Then from that point I remind them to always choose their breaths wisely, and indicate how important it is that their breaths make sense in the music. Using this KISS (keep it simple stupid) philosophy, which I learned in middle school math, has lead to my success as a teacher over the last 10-15 years.

Tell us more about your HAA students. What do you enjoy most about working with them? I teach all ages 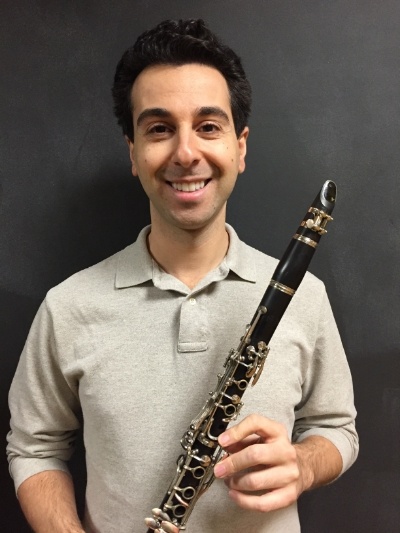 and levels so I’d say attitude instead of talent is what creates a good teaching environment. In the past I have had great students who were below average players and not so good students who were very talented. All of my students at HAA have good attitudes. I suppose I’ve been lucky that my students up to this point have not been forced to take lessons by their parents and are there because they want to be there. The student who stayed in my HAA studio the longest was Max Tolea, who took lessons for 6 years. Several others have studied with me for 5 years. (Julia Lombardo will be 5 years after she leaves next year). Christine Hatfield was 5 years as well. After teaching for a while, believe it or not, you begin to learn from your own students. I was not aware of this when I was younger, when I wasn’t interested in teaching at all. I thought practicing and performing was how you learn and improve. I remember every single student I’ve taught at HAA, and can say I have in someway grown a little bit from each of them as a teacher and musician. Most of my students do not end up pursuing music in college. The ones who don’t, often convey to me how much music has helped them in their academic preparations for college. One student even told me after taking his clarinet lessons he improved a great deal in his martial arts class.

What do you like about being part of Hunterdon Academy of the Arts? The facility is great. The people in the office are professional. I have gotten gigs from my fellow teachers. Also I’ve gotten the opportunity to perform with other talented faculty members. Recently the school has increased enrollment so there’s always a steady flow of trial lessons. When students walk in they see it’s a real music school, not simply a store that gives lessons. Also the recitals are important so the students have a goal and focus for their practice.

Your clarinet student Peyton Williams, who is our featured Student of the Month, performed with “Macy’s Great American Marching Band” on Thanksgiving Day. Congratulations on this wonderful student accomplishment! As her clarinet teacher, you must be very proud of her. How did you prepare her for this performance? Peyton is definitely going to major in music next year. To be honest I didn’t help her prepare for the parade too much since the music was pretty easy. She was very excited about it and it took a lot of rehearsal time She said it was a very long day and was tiring but was well worth it. She said some alumni from her school were there as well. I’ve been mostly helping her prepare for her high school wind ensemble solos and her college audition. She just performed in her holiday concert. She played one major solo that required to stand in front of the band. I believe it was a variation on Silent Night. She said it went very well. She’s also working on Weber’s Concertino for her college audition at Kutztown. She auditioned for drum major but didn’t get the job. I told her that if she had come to me sooner I could have helped her prepare for the audition. I’ve helped students prepare for drum major auditions and 100% were successful (Christine Hatfield, for example). I was the drum major myself in high school. Teaching conducting and how to express yourself with your body is extremely beneficial to every student. Peyton has a very good attitude. I could see her teaching public school music someday. She’s also a pianist which is always an invaluable skill as music teacher. As she gets closer to graduation I’ll be sure to impart on her the do’s and don’ts of being a first year music major. One of which being to take your piano proficiency test asap.

What are your favorite musical styles? As a clarinetist, you have much experience playing in ensembles. What do you enjoy about playing in group settings? I enjoy playing in chamber groups the most. Playing in orchestras is of course great. I don’t prefer any type of music over another. I listen to popular music mostly on the radio. I don’t listen to classical too much while driving. I always encourage my students to play in chamber groups. Chamber playing is where you learn how to listen. Pitch, tone, articulation, and phrasing are what chamber playing exposes. I always play duets with my students (them playing the high part and me the low one). I tell them we must work as a team. We must match articulation and phrasing so it sounds like a real duet instead of two soloists. Many students have conveyed to me the favorite part of their lessons are the duets. My own freelance experience is pretty extensive. I’ve played in symphonies, operas, musicals, chamber groups, solo opportunities. I’ve played with some pretty famous opera singers but the most famous popular singer I’ve been on stage with was Ray Charles. I’d say the biggest venue was Carnegie Hall or Alice Tully Hall.

What advice do you have for aspiring young musicians? Speaking as a woodwind player my advice is to sing. As I was saying earlier, younger students and even sometimes older ones treat the instrument as a foreign object, almost like a machine. You have to try and find your voice through the sound of the instrument. Mozart and Brahms both felt the clarinet very closely resembled the sound of the human voice. I always try and point out the vocal qualities of the clarinet to my students and impart how important vocal pedagogy is. If a young student is struggling I make them sing melodies and adopt a singer’s brain. Often when a student sings a melody, they get it right the first time (phrasing-wise at least). In the end the instrument must be an extension of their body and their voice.

Any professional projects--performance, recordings, etc., on the horizon? What is your “musical bucket list? My bucket list piece would have to be the Mozart Quintet for clarinet and string quartet. George Jones, my first teacher, thought it was the greatest piece of chamber music ever written, I just haven’t had the opportunity to play it.

What else would you like to share with our readers? Hobbies, other interests? I never took clarinet lessons when I was younger. My first lesson was my first year of college. I had talent so I was still able to excel in middle and high school. I was however doing many things incorrectly. If I had a private teacher he could have corrected them for me well before I got to college. When I first cover articulation with my saxophone and clarinet students I often tell them they’re years ahead of me since I did it wrong for so many years. My hobbies are golf, watching movies, listening to movie scores, and playing cards.